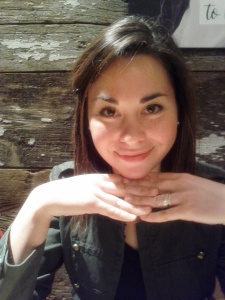 You probably know by now that my name is Emily.

I grew up in Sarasota Florida, lived in Manhattan and Queens over a span of two years, and I’m currently residing in Denver, Colorado.

My husband and I met in New York through mutual friends, and fell in love almost instantly. I’d like to think that we have a quintessential New York love story 🙂

My passion for food was ignited at an early age, and fostered by my late grandma Sandy. Going to Grandma’s house always meant baking cookies, or just eating cookies. As a young kid, I was totally all for that.

As I got a bit older, she loved watching the Food Network and would find so much joy in sharing her latest Rachel Ray recipes with me. That became a way of bonding between us.

Shortly thereafter my dear grandmother passed away after an all too quick battle with brain cancer.

In honor of her legacy, I took her love for food and family. I spent a fare amount of time through middle s and high school tinkering around in the kitchen. I was constantly inspired by a recipe in a food magazine or the latest episode of Barefoot Contessa. I began to think that I’d like to make a career out of cooking.

Before graduating from high school I dismissed my culinary aspirations and thought it would be wiser to get a “real degree” from a fancy liberal arts school. That is how I ended up in New York, at The King’s College.

I did make an honest attempt at that liberal arts thing, but I found that I was very resistant to the traditional college culture. During lectures I would zone out and run recipe ideas through my head. I would brainstorm dinner plans and grocery lists. I would research the restaurants I wanted to try.

okay, I did listen and learn some things. Yes, theology was interesting. Yes, I am thankful for what I learned at The King’s College, and yes, I did have some amazing professors.

But was I happy? No. I longed to learn something concrete, not theoretical or abstract. I longed to create something with my hands, not with a pencil. I was at the end of my second year in college that I began to re-visit the idea of culinary school.

Matthew and I were planning our wedding for that summer and we slowly became disenchanted with the idea of paying for an unfulfilling education in one of the most expensive cities In the country. Don’t get me wrong, living in New York City was one of the best decisions I’ve made. In fact, I would happily move back there at the drop of a hat. But for us poor college students and soon to be newly-weds, there came a time for us to reevaluate our situation.

After lots of praying and coffee shop talks, I applied and got accepted to Johnson and Wales College of Culinary Arts in Denver. So we decided to take a risk and move.

Almost two years later, I’ve earned my degree and I’m currently working at a gourmet neighborhood market. Matthew is finishing his degree in English and creative writing, and both of us are figuring out what our next big adventure will be.

One thought on “About Me”

A YEAR IN REFLECTION

a blog about nothing

a culinary journey beginning and ending at the kitchen table

Recipes and Recollections of a Southern Culinary Journey

arts and ideas review
Chronicles of my progress towards Africa

Food does not need to be fancy to be celebrated

Living, Drinking and Eating in Burgundy